With its boiler unit, the Altenstadt combined heat and power plant has a rated thermal input of 40.4 megawatt. The technology used is called “fluidised bed combustion”. This means that combustion basically takes place on a bed of inert material such as quartz sand.

The bed material is relatively coarsely grained and kept floating by primary air inserted from below. The fluidised bed is like a whirlpool full of water into which air is blown from below through nozzles distributed all over the bottom, so that the air rises through the water and causes a “bubbling” at the surface.

To start the plant up, two heating-oil fuelled burners are used in the combined heat and power plant which ensure that the boiler reaches its self-ignition temperature. 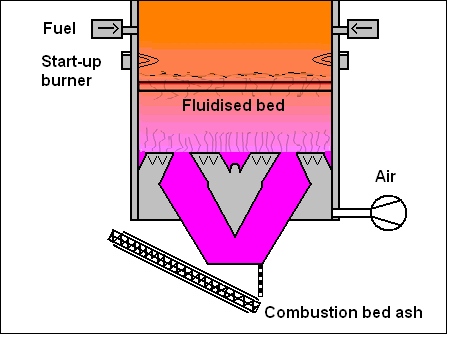 When that temperature is reached, fuel is supplied to the boiler through the drop shafts installed opposite each other, eliminating the need for additional supply of heat by the two burners. The supply of the solid fuel to the furnace quickly heats it up due to the thermal radiation of the combustion chamber, causing volatile matter to be released. 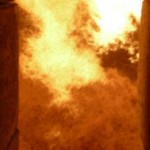 At that time, the fuel including its flame becomes a source of radiation itself due to the combustion and emits radiant heat to its surroundings. During this final heating phase, thermal conduction causes the gas extraction temperature to be reached also in areas of the fuel that are located farther inside.

The volatile matters and also combined water change to the gaseous phase which is associated with a considerable increase of the pressure inside the fuel. Small fuel components may actually burst in the process, while larger pieces tend to crack. The thorough mixing of fuel and combustion air effects a good heat distribution inside the combustion chamber. In this way, low-pollution energy can be produced from biomass with a low calorific value, combustion on the bed taking place at a temperature of about 800°C to 850°C.